The Trivium tour passed through Seattle shortly after frontman Matt Heafy, that he had to leave the tour. As fans were arriving, some were aware of the situation, others were not. It brought sadness and excitement, but fans instantly knew this show was going to be one to remember.

For the Seattle show, Howard Jones (Light The Torch & former Killswitch engage vocalist) would be stepping in for Heafy for most of the show. Avatar vocalist Johannes Eckerström would also be covering vocals on a couple of songs. For guitar, local musician and YouTuber Jared Dines would step in for Heafy. Anyway you slice it, this was a show full of challenges and opportunities.

The night started with a killer set from Light The Torch. Up next was Avatar‘s insanely amusing metal show. One thing for sure, the fans were ready for Trivium as they hit the stage. The crowd thinned before Trivium took the stage, but the audience was still a good size. Fans had a moment of pause as the show started, unsure if they were going to enjoy it without Heafy. That was cleared up as the set started and the music took over every fan in the venue.

Everyone gave their all to ensure the show went off without a hitch. Although we missed Matt Heafy, the show was pretty amazing. I personally enjoyed hearing Jones and Eckerström taking their turn signing Trivium songs! And one thing I kept reminding the fans, the rest of the band was present and kicking ass to give them a great show. A little different show that what we all expected but none the less, it was still a great performance! Fans who came out and stayed for the show got a an experience that won’t likely happen again! 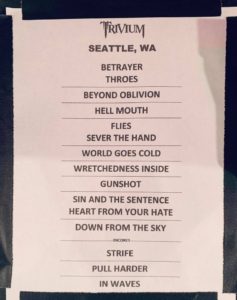 Album Review: Trivium ‘The Sin and The Sentence’

October 20, 2017 Diane Webb
Help Get The Word Out By Sharing This With Your Friends

Help Get The Word Out By Sharing This With Your FriendsTrivium Album: The Sin and […]

December 6, 2017 Diane Webb
Help Get The Word Out By Sharing This With Your Friends

December 5, 2017 Diane Webb
Help Get The Word Out By Sharing This With Your Friends