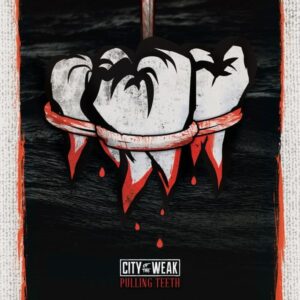 City Of The Weak, formed in 2012 in Minneapolis, are set to release their first full length album Pulling Teeth this Friday, June 22.

Let’s start out with what worked on this album. The writing was great! The music and lyrics are intriguing. The songs change-up to allow a variety to their sound for listeners to take in. On the first listen through of Pulling Teeth, there’s a cool vibe of 311 riffage that will be instantly familiar to fans of 311. That riffage blended on with their own unique style of writing makes the instrumental portion of the music enjoyable and interesting to listen to.

What didn’t work for me throughout the entire album, and I really hate to say it, Stef‘s vocals were over mixed which left a result of sounding over produced. Her vocals were too soft which makes her vocals sound more like the background when they should be the forefront in each track. What I wish we’d been able to hear is the rawness in her voice and a punch of aggressiveness in her vocals in tracks where they had clear momentum and you’d expect to hear that lashing come out in vocals. If you go back and look at songs like The Blame Game (2015) or Just Another Eulogy (2014), her vocals are less mixed and less produced which allowed more of the rawness to shine through in her voice, so I know what she can do with her vocals. That’s why I say the vocals fall flat on the album which is a real shame because I have no doubt that in a live show they will sound raw yet a lot of listeners may not give them that chance if this is their first experience with City Of The Weak.

In the track Trust Nobody there’s a lyric that goes “but I’m not gonna wait, for you to fuck up everything, no more Minnesota nice, I’m gonna get inside your head, and I will never, never think twice to make sure you end up dead”. The delivery was too soft and too nice. Where’s the raw aggression that Stef does so well? This was the perfect time to lash out with an angry and aggressive vocal range that would have taken this song from ok to phenomenal. It’s almost as if she’s playing it safe on this album, when she should go all in and let go to allow her vocals to have that rawness that is missing. The same is true with Like I Do, when she hits the bridge there’s the perfect moment to pop in something angry, aggressive and memorable, but instead there’s a tendency to go softer with a higher pitch. So for me, I just couldn’t get into this album. I honestly hate that because their past tracks have had that unique blend of vulnerable rawness that is missing today.

As you listen to this new album, I ask that you reflect on their previous work too. See their entire picture before deciding you don’t like this band. They definitely have it in them to have the rawness that’s stripped out of this release. Give Pulling Teeth a full and honest listen and if you are feeling like I am, take a listen to their other releases as well to see who they are. They are a band that is truly worth your full consideration. I’ve linked a couple of their older tracks below then their latest for you to easily check out.

Pulling Teeth Track Listing:
Like I Do
Trust Nobody
Glad You Could Make It
Not This Time
Censor This
Ungrateful
Drag Us Under
Drop the Anchor
Suffer Like Me
Pulling Teeth