Help Get The Word Out By Sharing This With Your Friends
SONS OF APOLLO
ANNOUNCES WORLDWIDE RELEASE OF
SPECIAL SIX-TRACK EP OF LATEST SINGLE, “ALIVE”/“TENGO VIDA” (SPANISH VERSION);
AVAILABLE NOW ON ALL DIGITAL OUTLETS;
MORE EUROPEAN SHOWS ADDED TO WORLDWIDE TOUR
IN SUPPORT OF #1 ‘PSYCHOTIC SYMPHONY’ ALBUM

The Spanish version can be seen here:

The English version can be seen here:

“It was discussed we should do a Spanish language version of ‘Alive’ before our first tour in South America and I was excited to make it work,” explains singer Jeff Scott Soto. “I brought in my close friend Alex to help with the translation as well as coach me on my enunciation. I am not fluent in Spanish so it was a difficult process, but it sounds pretty damn cool now that we made it work. I think my favorite part is hearing Bumblefoot singing in Spanish!”

Guitarist Ron “Bumblefoot” Thal is excited about offering these new versions of “Alive” to their fans. “I love stripping down a song to its simplest form, showing the core of what the song is,” he says. “The acoustic version of ‘Alive’ has that naked vulnerability, and shows what a great lyricist and melody-maker Jeff is.”

PSYCHOTIC SYMPHONY—which Loudwire.com called an “impressive debut disc”–debuted at #1 on Billboard’s “Heatseeker Albums” chart, as well as #10 on the “Rock Chart,” and #33 on the “Top Current Albums” chart. As Vintage Guitar declares, “This super-duper ensemble is like an old back issue of Marvel Team-Up that simply cannot be ignored.” Order it here: https://smarturl.it/SonsOfApolloPS.

In touring news, SONS OF APOLLO is set to launch the second leg of their first-ever highly anticipated world tour on April 19 in Montreal, Quebec at the Corona Theatre. The band has now added more shows in Mexico, Japan and Europe, including stops in the United Kingdom, France, the Czech Republic, and Toulouse, France for the Very Prog Festival on October 12. For more information about tickets and on sale dates, fans should visit SonsOfApollo.com.

As Mike Portnoy declares, “Ever since this lineup assembled to make PSYCHOTIC SYMPHONY, the thing I’ve been most excited about is anticipating how insane I know this band is going to be on stage. Well, the wait is almost over! Here are the first U.S. dates that will get to witness this ‘five-headed musical spectacle’ live on stage in February. We plan on being on tour all year long, all over the globe, with plenty of dates now being announced for summer festivals throughout Europe, but these are the very first shows that will get to witness this amazing lineup in person for the first time. We can’t wait!”

Released October 20 via InsideOutMusic / Sony, PSYCHOTIC SYMPHONY is available as a 2CD Mediabook (featuring a second disc of instrumental mixes and extended booklet with an exclusive Studio Diary), Gatefold 2LP vinyl + CD (which comes with an etching on side D and the entire album on the CD), Standard Jewelcase CD & digital download. It was produced by the dynamic production duo of Portnoy and Sherinian, also affectionately known as “The Del Fuvio Brothers,” which is the nickname given to them over 20 years ago during their time together in Dream Theater. 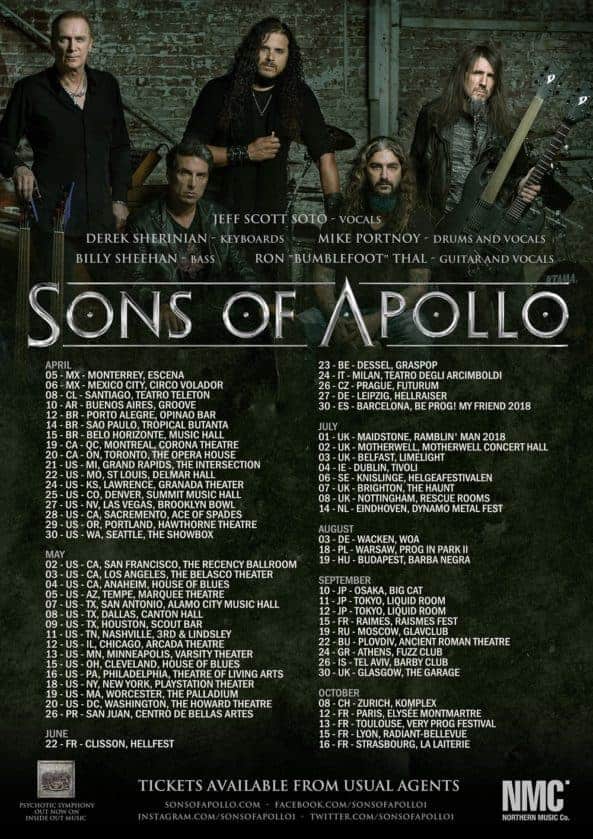 Check out SONS OF APOLLO at any of the following stops:

* A Very Special Evening with SONS OF APOLLO and the Plovdiv Psychotic Symphony.

Interview with Billy Sheehan on The Fell, and His Other Projects

February 4, 2018 Diane Webb
Help Get The Word Out By Sharing This With Your Friends

Sons of Apollo Live In Joliet

February 21, 2018 Bradley Todd
Help Get The Word Out By Sharing This With Your Friends

November 29, 2017 Diane Webb
Help Get The Word Out By Sharing This With Your Friends