Cyhra Band Makes North American Debut – In October of 2017 Cyhra released their first album ‘Letters To Myself’ via Spinefarm Records. Born from the collaboration of two musical masterminds, Jake E (former Amaranthe) and Jesper Strömblad (former In Flames), Cyhra has quickly become a favorite new band to many as they’ve listened to the album. If you’ve yet to experience ‘Letters To Myself’, I urge you to listen today. This was such a great album we placed it as our #2 album of 2017. It is an extremely deep, raw and intimate album filled with layers of amazing music. You can check out the full album review here.

Last week Cyhra joined Sabaton and Kreator on the fourth date of their North American tour in Portland, Oregon. I met up with Cyhra for their first three tour dates to check out their live performances, get to know the guys that make up the group and chat with the fans.  We have a full feature on these talented musicians coming out in March as we launch our digital edition so keep an eye out for that to come next month, but first we have live show coverage for you.

As many of you already know, a few days before the tour started an announcement was released that bassist Peter Iwers would not be accompanying the band on this tour due to prior commitments. A lot of fans were surprised by this announcement and wondered how the band was going to pull off the tour without him. The simple answer, bass tracking. Iwers had already recorded his bass tracks so they could be used on the tour, so while not being physically present, his bass work would be.

Our time with Cyhra started out at the Wonder Ballroom in Portland, Oregon. As with every tour start, there’s usually something that doesn’t go as planned. This held true for this tour as the band had a few obstacles to overcome; lost baggage with vital guitar equipment, technical difficulties and the typical first night of tour coordination. Throughout it all, they took it with stride and just worked through each issue to make it work. It also helped that they have an amazing team helping them with sound and their gear, so I have to give a nod to their sound engineer and techs. Sound check came and went and while not completely satisfied, the band carried on. To me as the listener, who’s been listening to their album for a good six months now, I couldn’t pick up the same issues the band could. So for the fans, that would mean a great show.

The doors opened and the venue quickly filled to a fully packed house. Some fans I talked to before the show mentioned they hadn’t heard of Cyhra before while a few others mentioned they had been looking forward to seeing them live. As the lights dimmed across the venue the show started off with “Dead To Me” which had the audience quickly paying attention to the stage in front of them. From that moment on, the audience was all in. The fans absorbed the music as Jake E belted out song after song. In between songs Jake E took time to talk the audience and the band mentioned it was his birthday. Fans gave him a big cheer that grew even louder as he dawned a Wonder Woman t-shirt for the show and mentioned that his wife was the real wonder woman. The band displayed great chemistry during their performance and at one point Jake E leaned in and kissed Jesper on the cheek. The band went on to perform the rest of their set with full intensity and ended the show with their first single “Karma”.

After the show I overheard a number of fans saying how much they enjoyed the show and how they needed to find their music. This was a great first night for Cyhra! 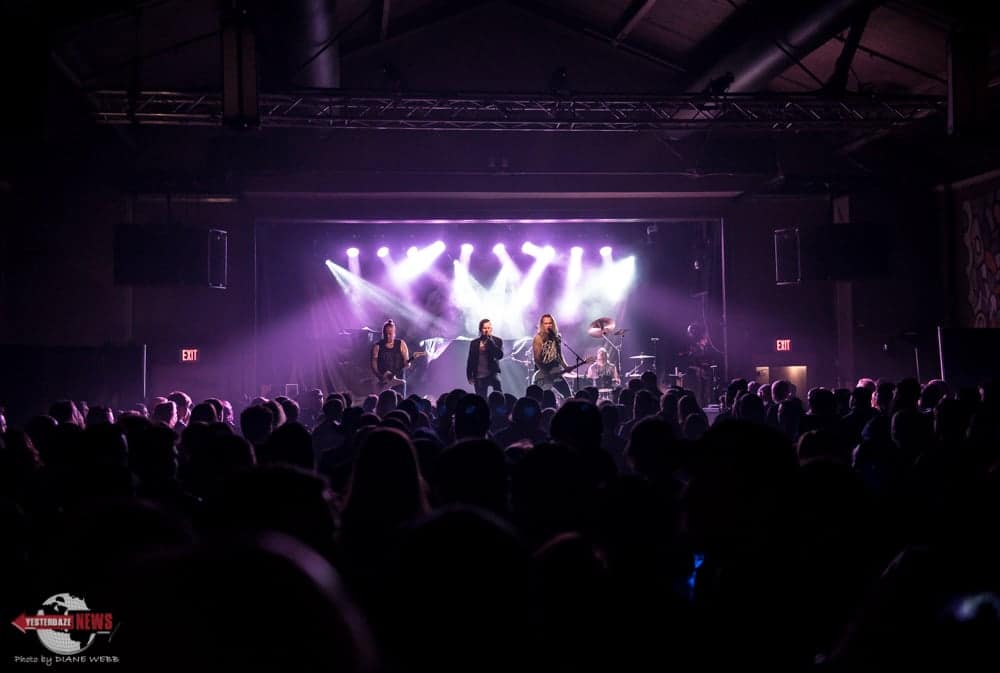 The second night of the tour brought us to the Showbox in Seattle, Washington. With their first official show in North America successfully behind them, they could start to really enjoy the performance part of the tour. The guys were much more relaxed after having a little downtime and a chance to check out some of the sights Seattle had to offer. The Seattle crowd had a different vibe, more fans knew who Cyhra was and made sure to arrive early to see them perform. During their show fans and the band interacted with each other.  Some fans in the front had their fists high in the air while singing along with the music, while others were simply content to sit back and watch the show unfold before them.  During this show Jesper Strömblad had the local favorite t-shirt on, a Seahawks tee to be precise. Fans may not know this, but Jesper is a self-professed Seahawks fan and he was proud to display that during the show.

The Seattle show had a great vibe between the audience and the band. This is exactly what I had hoped the band would experience from the audiences on this tour and it was really cool to watch it happen for the first time during the tour. As the band got to “Closure”, Jake E asked the audience take out their cellphones and shine their lights in the air. The room lit up as fans waved their arms back and forth and chills shot through me while watching this interaction. Being from Seattle, I personally have to say thank you to all the Seattle fans for making Cyhra feel so welcome in our city! Seattle, you were amazing! The guys closed the night out with “Karma” and on this night with the stage being a bit bigger, Euge Valovirta had a chance to get a bit funky and dance a little as the show wrapped up. The second night of the tour was spectacular! 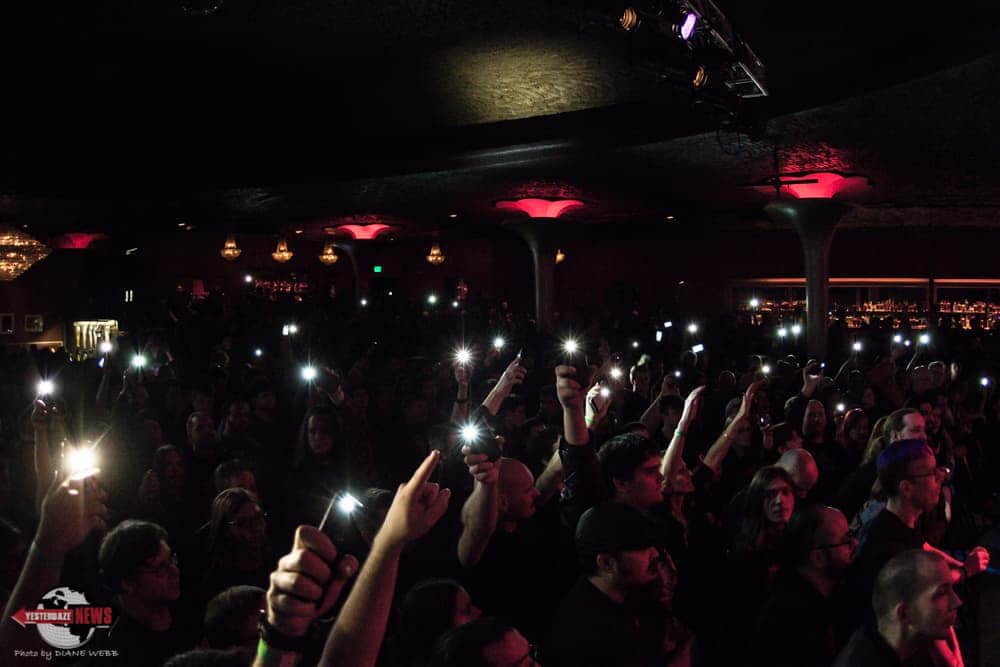 My time with Cyhra wrapped up on their third North American tour date which also happened to be their first Canadian tour date at the Vogue in Vancouver, B.C. This was the biggest venue and crowd for their tour yet. Even with a competing show across the street at the Orpheum, the Vogue was still completely packed. This was a stunning venue with a massive stage that meant the band would finally have the ability to move around freely and let lose completely during their set. As with the night before in Seattle, many of the fans in attendance also knew who Cyhra was before getting to the show.

As the show kicked off there was an additional element of fog that wasn’t part of the last two performances, but added an extra level of ambiance to the show that was about to unfold before the Vancouver crowd. As Jake E took the stage, it was clear he knew how to handle the large stage and crowd before him. He was then joined by Jesper Strömblad, Euge Valovirta and Alex Landenburg. The band was ready to deliver one hell of a performance to on looking fans. During this performance we got to see more of Alex, who the previous two nights was tightly packed in behind his drum kit. The larger stage gave him the ability to interact with the band on stage and at one point in the evening he stepped out from behind his kit with cellphone in hand to capture some video of the guys on stage and the crowd below.  It was clear that the band was having a great time during their performance and they completely owned the stage. 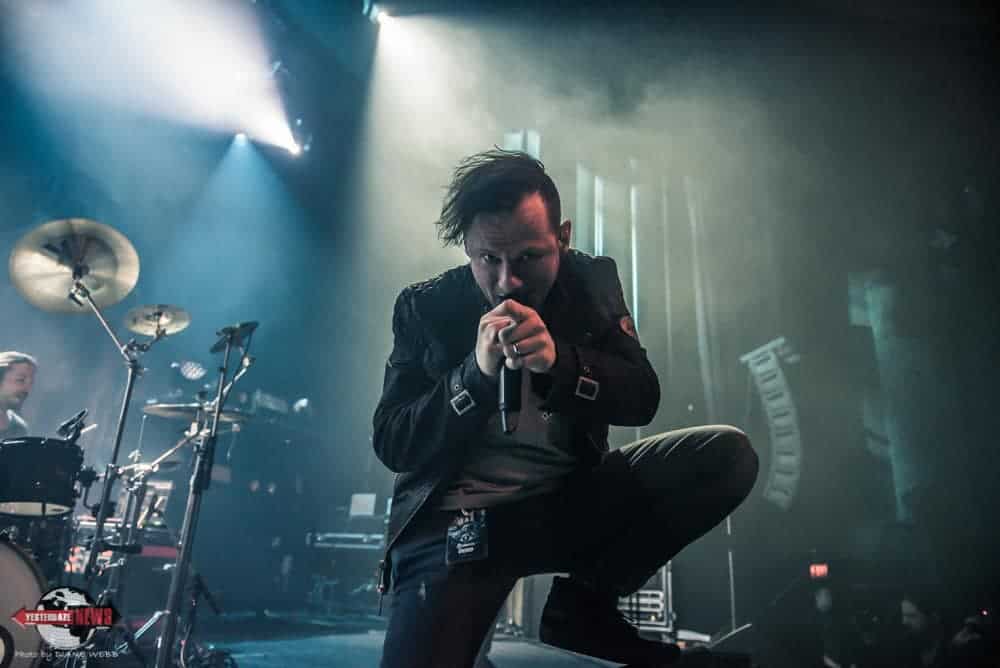 Cyhra performed another great live show and left the fans talking about them after their set. I ran into a few fans in the lobby chatting about the band and what they knew of them and how much they enjoyed this performance. That became the repeated conversation throughout my time with this band during their first few tour dates in North America. Fans completely enjoyed their music and performance.

This is a band I would highly recommend you get out and see live, plus they are with two other amazing bands, Sabaton and Kreator. So why would you not want to see this tour? They are playing in Calgary tonight and have a good number of shows left on this tour so you have numerous opportunities to catch them. The remaining tour dates are listed below.

On a side note, if you are wondering why I didn’t cover Sabaton or Kreator? Another one of our writers caught the Los Angeles show to officially cover their co-headlining tour, that review is coming very soon. So rest assured, we covered them all.

Album Review: CyHra Letters To Myself

September 27, 2017 Diane Webb
Help Get The Word Out By Sharing This With Your Friends

Help Get The Word Out By Sharing This With Your FriendsAlbum Review: CyHra Letters To […]

February 21, 2018 Tammy Greene
Help Get The Word Out By Sharing This With Your Friends

June 30, 2021 Diane Webb
Help Get The Word Out By Sharing This With Your Friends