FOZZY, the active rock band led by Chris Jericho, will continue to rock their fans across America on their Judas Rising Tour with newly added tour dates in 2018.  Set to launch February 28 in New Orleans, LA, the 25-date trek will take the band (Jericho: vocals, Rich Ward: guitars, vocals, Frank Fontsere: drums, Billy Grey: guitars and Paul DiLeo: bass) from east to west, including stops in Los Angeles on March 10 and New York City on April 5, before bringing them back across the country through the spring. Through Fire, Santa Cruz and Dark Star Choir will round out the bill for the night of rock headlined by FOZZY. Tickets for these newly announced dates (see below for list) go on sale to the public Friday, December 8. 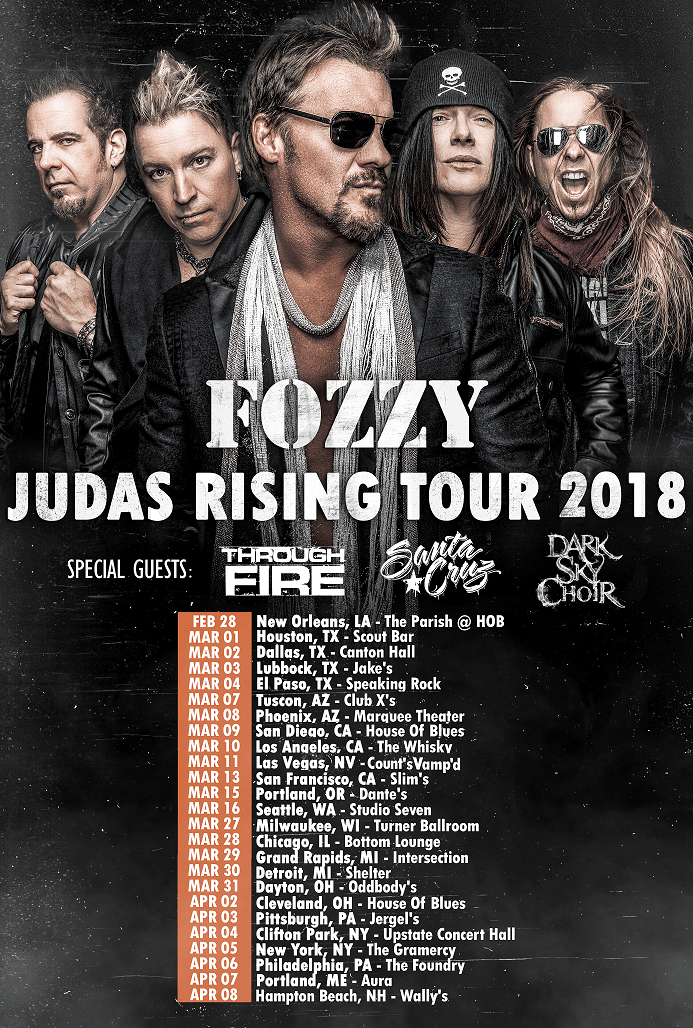 “I’m stoked to do this extensive tour of the States now that ‘Judas,’ the song, is a Top 5 rock radio hit and Judas, the album, has gone top 40!” says Chris Jericho.  “Fozzy is bigger than we’ve ever been, which means bigger production, bigger songs and bigger lighted jackets! So we can’t wait to rock your literal socks off starting in February!! JUDAS IS RISING!”
“I started playing guitar because of how deeply powerful the experience of going to concerts was for me,” Rich Ward adds.  “With a hit single and a new album pushing Fozzy to new heights, I can’t wait to get back on the road in America to capture the power that only live music can create. Make sure to bring a helmet and your dancing shoes when Fozzy rolls through your town.”
The upcoming dates come on the heels of the October release of the band’s seventh album, JUDAS (Century Media), which Loudwire named as one of the top 25 albums of 2017, saying the band has continued “honing their craft and steadily improving. JUDAS is their most polished and fully realized album, and should be their most successful, as well.”
The album’s title-track and single “Judas” was released in May 2017, becoming a top 5 hit at active rock radio.  The song also spent five weeks at number oneon the highly influential ‘Big Uns Countdown’ on Sirius/XM’s Octane channel and has amassed over 11 million views for its video on YouTube.  Cryptic Rock (10-13-17) says the song is “A passionate and bombastic tune showcasing the band’s irresistible energy and uncanny ability to rock hard, it is as good as it gets.”
In their more than 20-year career, FOZZY has always been about hard work, dedication and delivering great rock n roll to their devoted fans worldwide; reminding them that music is all about invoking dirty, sweaty jubilation and doing it loudly!  However, calling them just “entertainers” would be abridging their talent as Ward is one of the most versatile, underrated riffers in rock n roll and Jericho‘s vocal range and passion for music makes one wonder just how he is able to excel in pretty much everything he does. Throw in the powerhouse rock solid drumming of Fontsere, the blazing leads of Grey and the genius and energy of returning bassist DiLeo and it’s no surprise that FOZZY has skyrocketed into becoming one of the hottest rock acts in years.

For more information on FOZZY, visit:
www.fozzyrock.com
About Diane Webb 1295 Articles
I am music fanatic, writer, photographer, music publicist, artist manager and aspiring to player of bass as well as guitar so I can write the music I hear in my head, plus play some of the sick riffs I hear on albums I listen to. I love travelling to see new places, meeting new people, learn about local cultures and live with chronic wanderlust. Music, travel, good friends/family and enjoying life is key! I write for Yesterdazenews Magazine, Rocknytt.net (Sweden) and HRH Magazine (UK). You can follow my photography on Instagram: @yesterdazenews Facebook: @YesterdazeNewsPhotography. Follow my publicity on IG/FB @playloudagency.

February 7, 2018 Diane Webb
Help Get The Word Out By Sharing This With Your Friends

July 3, 2017 Diane Webb
Help Get The Word Out By Sharing This With Your Friends